To Sicily By A Train On A Ferry

Sicily is the sunny island at the southern tip of Italy. Here you'll find lush green mountains and white sandy beaches, fried street food and decadent desserts, smouldering volcanoes and idyllic islands, and a rich architectural heritage from its history of invasions. The Greeks, Arabs, Normans, and Spanish have all made their mark on this fascinating island. It feels like part of Italy but has its own distinctive character.

Travelling to Sicily with a One Country Pass is easy, if a little time-consuming, as there are direct trains from Rome or Naples to various destinations in Sicily. It's a unique journey. The train is transported on a ferry across the Straits of Messina before being split into two parts and continuing on the rail tracks in Sicily ― one heading west and the other east.

You can take a direct air-conditioned Intercity train to Sicily from Rome or Naples, or connect in these cities from across Italy. It’s a 9 hour journey from Naples to Palermo, or 11.5 hours from Rome. You can also disembark at other destinations in Sicily. We got off at Milazzo (6.5 hours from Naples) to take a ferry over to the gorgeous Aeolian islands, before continuing down to Palermo a few days later.

You could also stop at the scenic beach town of Cefalu on the way to Palermo, or travel to the eastern side of the island to beautiful Taormina, Catania (the base for visiting Mt Etna) or historic Siracusa. After travelling slowly down to the “toe” of Italy’s boot, the train reaches Villa San Giovanni where it is split into two parts and rolled onto the ferry. It's an impressive feat of engineering. This can take a while, and our carriage lost power (no lights or air conditioning) while they loaded us on, which added an element of adventure to the experience!

Once the train is on the ferry, the trip across the water to Messina on Sicily only takes about 30 minutes. You can stay seated in your train carriage in the ferry’s hold. Or you can head up on deck for some fresh air and to enjoy the views of Sicily. Just don't forget your way back to your train!

Moving a train onto a ferry and off again is quite a feat, and it takes some time. Trains on this route are often delayed. Ours was about an hour late, so make sure you take that into account when planning any onward travel. 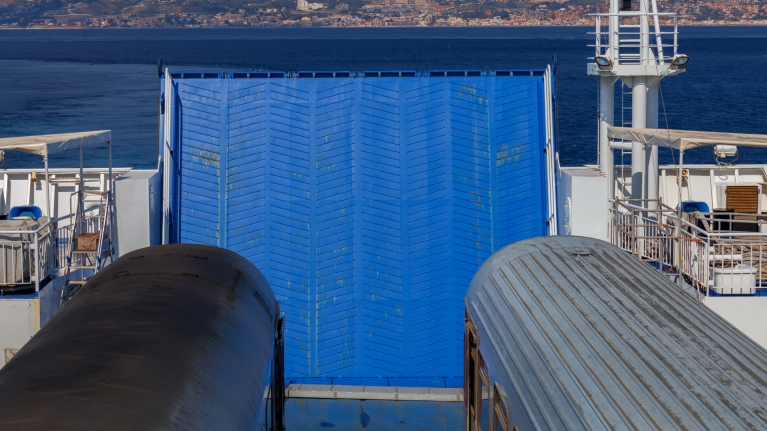 You will need to travel by Sicily Intercity train to reach Sicily. Reservations are optional unless it is an overnight train, for which it is compulsory to reserve your sleeping accommodation. It is a good idea to reserve the InterCity to be sure you have a seat, especially in the summer. Reservations can be made at ticket desks or self-service machines in train stations, or online, and only cost 3.50 euros on the day train.