10 Cities To See If You Love European Architecture

Europe is a playground for architecture buffs. From medieval monasteries and Renaissance castles to cutting-edge modern design, European architecture is the world’s most varied ― and it is all contained in such a small geographic area. We have already brought you the 10 most important cities for architecture, now here’s 10 more!

European architecture could be the driving theme of your trip or just a cool side benefit. Imagine yourself with a  Global Pass, in a new city every day, sipping an espresso with your eyes feasting on that city’s famous architecture. 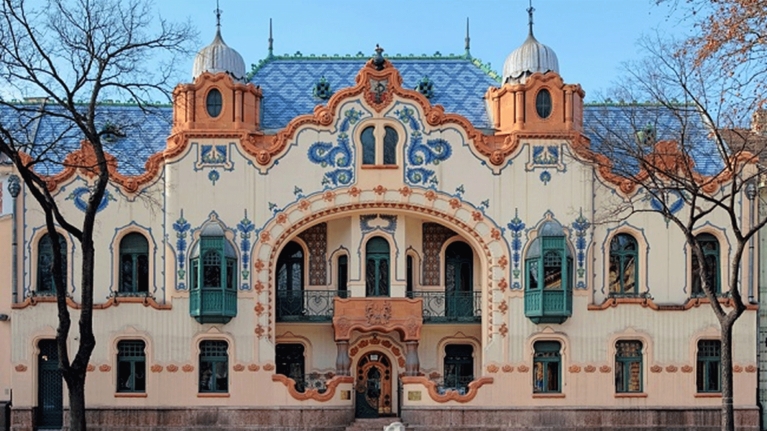 Most people think of Prague or Barcelona when you mention Art Nouveau. But little-known Subotica is a big-time player in the world of so-called “new art” style. Once part of the Kingdom of Hungary, this border town of Serbia still has a mix of cultures, with ethnic Hungarians, Serbs, and Croats. Subotica reached its golden period during the beginning of the 20th century when most of its monumental structures were built. The style here is technically the Hungarian version of Art Nouveau-Secession, and today 41 buildings in the style remain.

Situated on the rail line in northern Serbia, Subotica is about half-way between Budapest and Belgrade. It makes a wonderful stop between the two. Trains run the route only twice per day, so plan accordingly.

Must-see building: The City Hall is an outstanding example of Secession architecture. The Synagogue, the Raichle Palace, and banks are not far behind in terms of stand-out beauty. 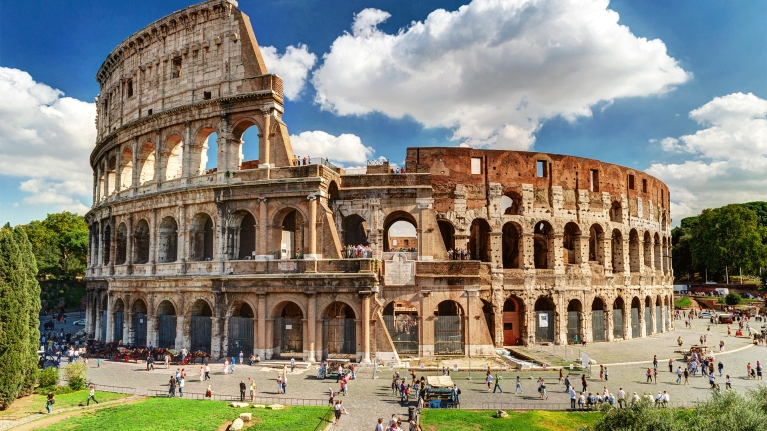 Some might say putting Rome on a list about European architecture is too obvious. But, really, you cannot overstate the scope of Rome’s architecture. It spans millennia and contains the single most important structure in Western civilization: The Pantheon. Much of classical architecture developed in Rome and new forms such as the arch, the dome, and the vault were pioneered here. Have a gander around the Roman forum and the godfather of all Roman monuments: The Colosseum. But it does not stop there: Rome’s buildings include those in the Romanesque style (11th-13th centuries), Renaissance, Baroque, Neoclassical and Fascist architecture.

All roads lead to Rome, right? Or in this case, rail lines. You can easily add Rome to your  itinerary after Venice and Florence, and before Naples, to the south.

Must-see building: Even 2000 years after it was built, the Pantheon’s dome is still the world’s largest unreinforced concrete dome. Once that sinks in, go get yourself a gelato. 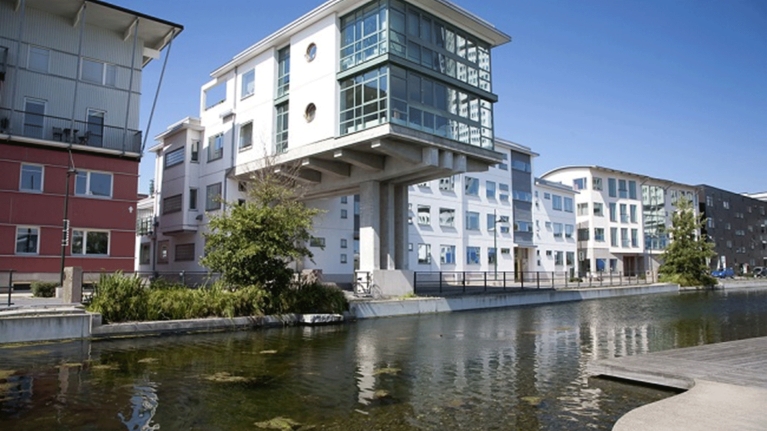 At the southern end of Sweden, Malmö shines a blazing path of architecture to the future. Although it has a few buildings of historic interest, you go to Malmö to see how humans will live in the future. Green initiatives are paramount, but that does not stop structures from being attractive. The city of Malmö has even laid out a bike route past all the buildings it considers worthy of its architecture self-guided tour. The new development is mostly located at Western Harbour, a huge reclaimed area in front of the city’s medieval centre that used to be one of Europe’s largest shipyards.

Despite its physical location across the Baltic Sea in Sweden, Malmö has a good connection to the rest of Europe thanks to the Öresund Bridge, an impressive feat of engineering itself. Just across the strait from Copenhagen, it makes a nice stop before riding the remaining four and a half hours to Stockholm.

Across the Öresund Strait lies the better known of these twin cities: Copenhagen. This city blends the modern and antique more smoothly. The town showcases architectural styles from Medieval times, the Renaissance, Baroque, Rococo, and the 21st century. Since 2000, Copenhagen has seen a rise in modern architecture by leading international architects and a string of new successful Danish architects. This new golden age has produced modern masterpieces such as Sampension, Kilen, Tietgenkollegiet, and the Royal Playhouse ― all award winners.

Copenhagen is well-linked as a rail hub. Virtually all trains between Sweden and Germany will stop in Copenhagen. Hamburg, Germany is about 5 hours away and Stockholm, Sweden, is only five hours and fifteen minutes up the high-speed line.

Must-see building: The Royal Playhouse, situated on the harbour and constructed in 2008, is well worth checking out. While you are at it, see what makes the nearby $500 million neo-futuristic Copenhagen Opera House so special. If that is not enough, then the National Aquarium Denmark is a gorgeous new building out in the suburbs.

Although its architecture is not necessarily in one cohesive style, Krakow earns its spot on this list at having been spared excessive bombing during World War II. As Prague is for the Czech Republic, Krakow is Poland’s gift to tourism. It is quite simply one of Europe’s outstanding destinations. Krakow was splendidly rebuilt after being sacked in the 13th century, and much of that is celebrated today. Four hundred years ago the capital moved from here to Warsaw, but the city remains Poland’s cultural and intellectual heart.

Poland is now included on the Global Pass, and Krakow is well connected by rail to Wroclaw, Warsaw, and other cities. Reach Krakow from Warsaw in about 2:30 with the high-speed line or much longer on slower, regional links.

Must-see building: Krakow’s Main Market Square, or Rynek Glowny, is the bustling heart of Krakow and one of the largest town squares in Europe. You cannot miss it.

Rothenburg is Germany’s best-preserved walled town. Situated on the famed Romantic Road in Bavaria, it lies about halfway between Frankfurt and Munich. It is known for its medieval architecture, undamaged 14th-century town wall, half-timbered houses which line the cobblestone lanes of its old town, and its 500-year-old wooden altarpiece by Riemenschneider. In the Middle Ages, Rothenburg was Germany’s second-largest city. Today, tourism has taken over this now-small town. Busloads of day-trippers crowd Rothenburg by day, so plan to stay overnight and witness the town in the more serene hours of morning and evening.

There are several “Rothenburgs” in Germany. Make sure you are going to Rothenburg ob der Tauber (on the Tauber River). It is about 3 hours to Munich and slightly less to Frankfurt. The train station is east of the town wall, about a 15 minute walk away from the centre Market Square.

Must-see building: The incredible intact town walls include many preserved gatehouses and towers, in addition to the covered walkway on top.

Another touristy small town that is totally worth it: Carcassonne, France. This exemplary medieval fortified town in the Languedoc-Roussillon region has a history going back two and a half thousand years. Its massive defences protecting the castle and surrounding buildings, as well as its streets and fine Gothic cathedral, have earned it a place on the UNESCO World Heritage list. Perched on a rocky hilltop, Carcassonne is a 13th-century world of towers, turrets, and cobblestones ― a fairy-tale town. Visit in the off-season to avoid heavy crowds.

Trains from Paris reach Carcassonne (via Narbonne) in five and a half hours and from Toulouse is only an hour. The Carcassonne rail station is on the northern edge of town. You can reach most points in the centre on foot in 5-10 minutes.

Must-see building: The Cité de Carcassonne steals the show here. It has picturesque fortifications and over 3 km of walls with 52 towers!

Helsinki does not appear on too many lists. It doesn’t have a lengthy history or a medieval centre. But what it does have, it does very well. Helsinki has museums dedicated to the world-renowned Finnish design and architecture. The styles that really shine here are Modernism, Functionalism, and Art Nouveau, with which it has the largest concentration of in Northern Europe.  Art Nouveau, or Jugend architecture, as it’s called here, was interpreted in Finland according to its own form of National Romanticism. Some of its finest examples include the Jugendsali Hall from 1904 and the National Museum from 1910. The works of world-famous Finnish architect Alvar Aalto represent Modernism at its finest.

Helsinki is the hub of rail travel in Finland, with connections to Tampere and ancient capital Turku. Although the country is cut off to the rest of Europe in terms of rail connections, it is worth making the effort to get here. Ferryboats connect Finland with Tallin, Estonia, and Sweden.

Must-see building: Eliel Saarinen’s Central Railway Station from 1914 is a revelation in the Late-Jugend style. You are guaranteed to see this fabulous building if you arrive in Helsinki by rail. Built incredibly into the bedrock, the Temppeliaukio “Rock” Church might be second on the list.

As one of Europe’s leading cities in about 1500, Nuremberg was a stronghold of the Holy Roman Empire. Today, its old town showcases stunning medieval architecture. This second city of Bavaria has a half-million residents. But a walk through its charming old streets, past half-timbered houses, Gothic churches, all in the shadow of an imperial castle, will have you believing it is a much smaller city. Remember to eat some of Nuremberg’s famous little bratwurst. Consider visiting in December, when Germany’s biggest Christmas market is open.

Nuremberg is an easy hour-long trip on the train from Munich and slightly longer from Regensburg (another fine old city) or Rothenburg. Direct connections from either Hamburg or Berlin come in at under 5 hours.

Must-see building: The Imperial castle (Kaiserburg), with the Burggrafenburg, and the municipal buildings of the Imperial City are a great place to start. The city walls are also impressive. The 4 km that are still standing show you why they are considered some of the most formidable medieval fortifications of Europe

With Florence, Italy, it is art that comes to mind before architecture. But this city, the epicentre of the Renaissance, is so rich with culture that its architecture still shines. The city is overflowing with notable examples of Romanesque, Gothic, Renaissance, and 17th-century buildings as well as a sprinkling of neoclassical and Rococo and Habsburg-Lorraine period. Florence deserves its place on any European rail adventure and you will need at least two days to do the city justice.

Florence is conveniently situated in Tuscany about half-way between Rome and northern Italy. It is an hour and a half direct ride from the Italian capital and less than  two hours from both Milan and Venice on the direct high-speed Freccia trains.

Must-see building: Although the Baptistery and Ghiberti’s masterful bronze doors are arguably Florence’s most important building, it is the Florence Duomo that stands above both literally and figuratively. Brunelleschi’s dome propelled Italy and the world out of Medieval times, and into a confident new age known as the Renaissance.