The city of Naples is just over 2 hours south of Rome by train, and it is the perfect gateway into one of the most fascinating regions of Italy. The city itself is all-consuming and thoroughly engaging. Naples may be grittier and more overwhelming than many of the country’s main tourist cities, but that is precisely why you should go. When the bustling streets and cramped alleyways get a bit too much, there are several superb day trips from Naples to help you get away from it all. Naples is the third most populated city in Italy, and you will know all about this if you try to walk its main streets during rush hour. Or pretty much during any daylight hour. But the frenetic chaos and energy is what makes this city one of the most engrossing in Italy. There’s an abundance of things to see and do around the city, and its steep winding alleyways, panoramic views and truly distinct culture require at least a few days of exploration.

Naples also happens to be the home of pizza, which means there is almost no such thing as a bad pizza in Naples. The city is so much more than just a gateway to southern Italy, and it is the perfect starting point to set the tone for thrilling adventures to the nearby cities.

How to get there: There are daily trains from Rome’s Tiburtina Station to Naples that take upwards of 90 minutes.

Pompeii is one of Italy’s most popular tourist attractions, but you will want to make your way directly to the archaeological site ― the city itself is slightly underwhelming. Naples is the perfect base from which to explore Pompeii. It is well connected by train if you want to explore the ancient location on your own, or there are several organized tours that leave daily from Naples.

Insider tip: Only purchase your tickets for the ruins at the entrance gates. There are dozens of ticket tours and information agents throughout the city who will try to sell you overpriced tickets and packages.

How to get there: Take the Circumvesuviana Napoli-Sorrento line from Naples.

When Vesuvius erupted in 79 A.D., it did not only wipe out the city of Pompeii. The nearby city of Herculaneum was also a casualty of the infamous volcano. And while it is less well-known than nearby Pompeii, many people prefer it for its more manageable size, fewer crowds, and impressive on-site displays.

Insider tip: You can combine a trip to Herculaneum with one to Pompeii, but it will be a fairly long and tiring day. Rather choose one or the other, depending on your interests.

How to get there:Take the Circumvesuviana train to Ercolano Scavi Station. 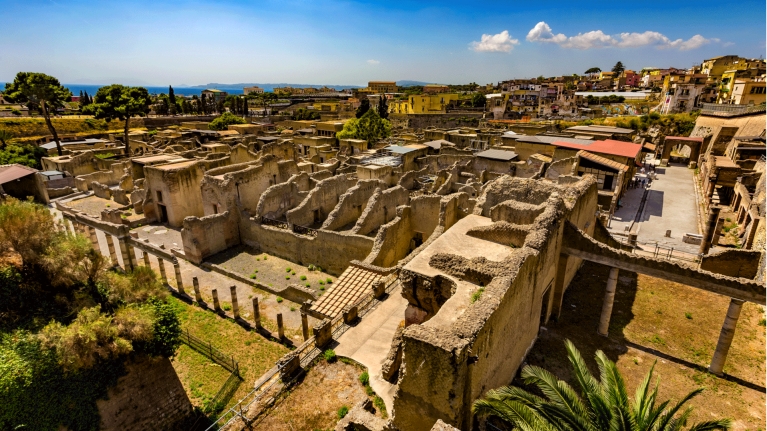 The Amalfi Coast spreads out along the beautiful rugged coastline a few hours south of Naples. The coastline’s spectacular scenery and relative inaccessibility makes it one of the more expensive regions of Italy to visit. This is especially true if you intend staying overnight, which is a good reason to include it as a day trip. Trains will get you all the way to Sorrento. From there, you have several options for day trips via bus around the spectacular coastline.

Insider tip: Do you intend to get off at any of the popular towns along the way? Purchase a 24-hour bus Pass to explore the Amalfi Coast.

How to get there: Take the Circumvesuviana Napoli-Sorrento line to Sorrento, and then purchase a bus ticket to Amalfi at the station. 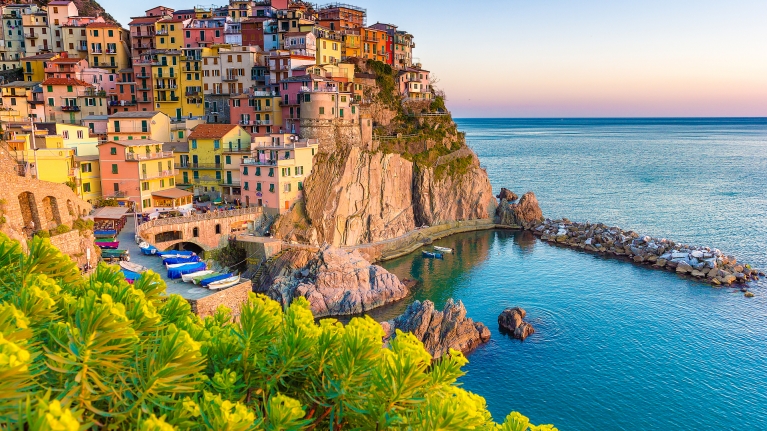 Sorrento is an easy train ride away from Naples. Many people choose to make this city their base for exploring the Amalfi Coast and nearby islands. While it may be slicker and more tourist-friendly than Naples, it is also more expensive and somewhat less enthralling. If you are intent on exploring the Amalfi Coast and the island of Capri in more depth, then a night or two here may give you more time in the region and allow you to see most of the small coastal city.

Insider tip: Combine a trip to Sorrento with a ferry ride to Capri. It is one of the most glamorous (and most visited) of the islands in the Bay of Naples.

How to get there: Take the Circumvesuviana Napoli-Sorrento line to Sorrento. Ferries to Capri leave from the nearby port. 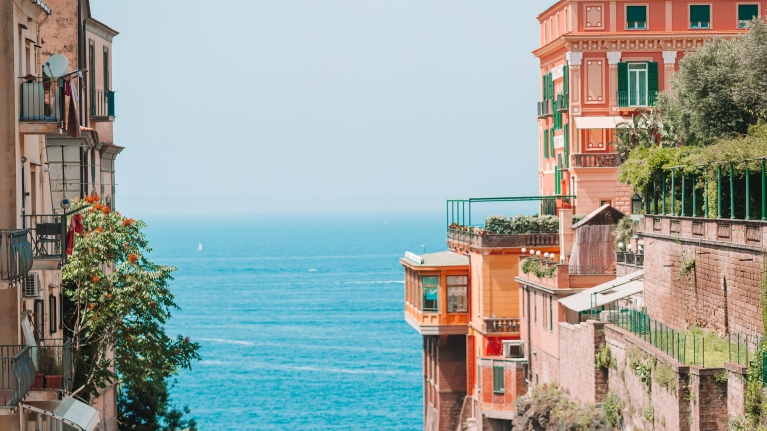 The island of Capri is situated just 3 miles (5 km) from the mainland of the Bay of Naples. But it feels like another world altogether. Dramatic scenery, deep blue waters, fascinating history, and dozens of thrilling photo opportunities have cemented this as a favorite among visitors since the days of the Roman Republic.

Insider tip: More than one ferry company offers trips to Capri. Each usually offers discounts for return trips bought in advance. Be sure to check prices and departure times of each before committing to one company.

How to get there: Daily ferries leave from Naples, Amalfi, Positano, and Sorrento. 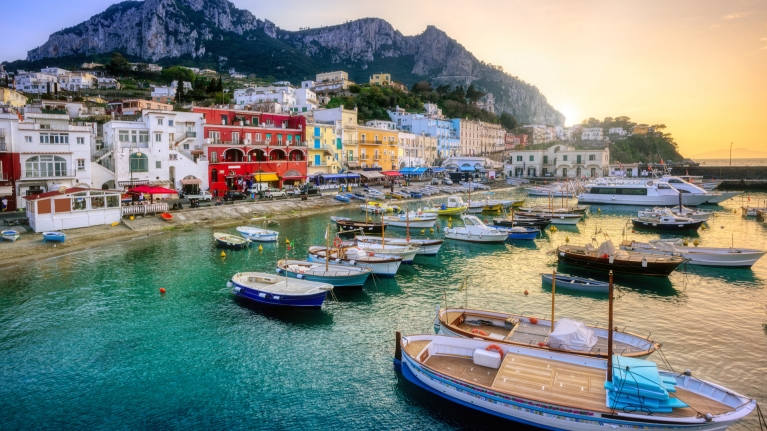 Mount Vesuvius looms high above the Bay of Naples. It will form the backdrop of many of your photographs while you are in the region. If you want to get a closer look at the volcano that wiped out the entire city of Pompeii and a handful of others in the region, you can take an easy day trip there from Naples.

Insider tip: If you are not up for a steady hike to the summit, take the bus up the side of the volcano. This leaves a much shorter distance to walk to the crater. A combination ticket from Vesuvio Express may be cheaper than purchasing a separate ticket for the bus and the crater.

How to get there: Take the Circumvesuviana railway to Ercolano (Scavi) and then take the Vesuvio Express. 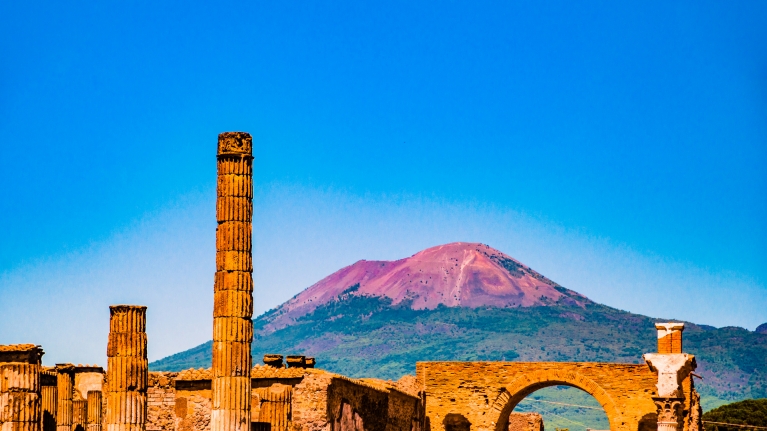 There are few cities in Italy as fascinating and well connected as Naples. Hop on a train in almost any direction and you will find yourself immersed in intriguing history, beautiful scenery and delectable dining, or, often, a combination of all three. And when you consider that Rome is just a short high-speed train ride away as well, there is no reason why you should not include this fascinating region on your next Italian rail journey.